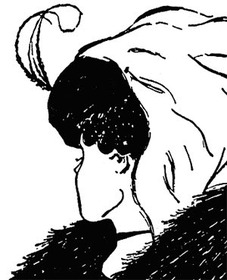 It's all how you see it.

Lately, the notion that "LTC is a Women's Issue" has been generating a lot of buzz, but the truth is our industry has been tugging at this thread for years. In my possession are studies, statistics, articles, and agent presentations dating back as far as 2007, and I'm certain I could dig deeper.

Not much has changed since those early days-- perhaps the attempts at segregating the demo were more ham-handed then-- but a calculated attempt to market LTCi to women has been an ongoing plotline for years. What's not so obvious is whether this is desirable or warranted.

As we've taught before, the perennial problem with "locking on" too single-mindedly is the danger of seeing the Old Hag at the expense of the Young Maiden (see image at right). It serves no purpose disenfranchising entire segments of the population, which is why dubious phrases like "LTC is a Women's Issue" make poor Sales Ideas.

In a few minutes, I hope to show you a much richer image...

STATISTICS
Statistics are the scaffolding upon which our LTC house is built. I could choose from literally hundreds, but let's cite just a few so we speak a common tongue:

It's an extremely challenging portrait, is it not? One LIMRA article suggests that women lag behind men in retirement planning for any number of reasons, including choice of more flexible career roles and lack of financial literacy (sigh)...as if financially literate men are knocking down our doors for LTC insurance.

GENDER-BASED RATES
Never have innocuous powder-blue and bubblegum-pink datapoints had such dire consequences as when plotting "gender-distinct pricing". But the trends had become too obvious too ignore.

Besides, as one actuary put it, "We've always had gender-based rates: we just blended them here in the home office before the ratebook reached the field." In other words, men have been subsidizing women for a long time. The companies depended on receiving and issuing a certain ratio of male-to-female applicants, and all was right with the world.

But what if this decade-long "LTC is a Women's Issue" campaign really took off? What if one company received an extraordinarily high number of female applicants? They are costlier claimants who don't pay the premiums they should. Without enough men to balance them out it could topple the ship.

Enter gender-based rates: men pay what men cost, and women pay what women cost. No longer does it matter how many men or women apply (and are issued). Neither can upset the balance of the ship. For this reason, gender-distinct pricing is said to provide greater protection against the need for a potential rate increase.

As of this writing two industry leaders have so far taken the leap, while their peers are more reticent. Whether gender-based pricing becomes universally adopted or not may be the result of a feedback loop in which we can all participate.

EARLY MARKETING
Today's target-market materials sound polished and highly focus-grouped. Sample: "Chances are, you've experienced being a caregiver at some point in your life, so you know how demanding a role it can be."

It wasn't always this way.

Looking back, the corp-speak terminology amuses: "Troubled TryHers" and "Masterful Moms". Agents were presented with Psych 101 lessons regarding the difference between the male brain ("compartmentalized", "task-oriented") and the female brain ("connection-oriented", "holistic").

It would be humorous to laugh-off such psychodynamics as relics of the past, but one carrier from 2011 (!) suggested that most women, "like to talk about their feelings, experiences and relationships," and will do business with someone "when she feels heard and understood".

Perhaps attempting to capitalize on this, one clever LTCi agency developed a marketing campaign whereby female shoppers were paired with female agents.

It's a V-8 idea that raises an intriguing question. If the narrative is that long-term care overwhelmingly touches women's lives, then shouldn't we expect to find an abundance of women in bottom-to-top roles, from producer to C-Suite Executive?

As it turns out, although it's well-known that women comprise a slight majority of the US population, they are under-represented in our LTCi agent population (42% to 58%). And NAILBA found: "Even though women in the insurance business do hold senior level positions, it is still a male-dominated business."

There could be a myriad of reasons for the lack of proportionate representation of women in a "women's issue" field. Or perhaps the premise is wrong.

THAT WAS THEN, THIS IS NOW
The trouble with so many numbers upon which our arguments are based is how backward-facing they are: the science is already old. As reported here, here and here for 3 years now: women's lifespans are shortening. (Reasons why include women working outside the home, job-related stress factors, alcoholism, smoking and immigration.)

The male population is growing much faster than the female population in the age 60+ group and will "for the first time, create a gender balance among our seniors". The ramifications of equal longevity between the sexes in the next few decades will change everything we know about long-term care delivery and funding. Already, men comprise 40% of adult caregivers (up dramatically since 1996).

This trend will "alter the dynamic of caregiving from a primarily female burden to a shared responsibility." Another report concludes the coming gender balance in the oldest age groups has "wide implications for family relationships in old age and caretaking with more potential partners for older women."

IT'S A FAMILY ISSUE
In the end, of course, I'm not an actuary: it's easy for me to read pop-culture articles and throw pot shots from the gallery. However, statistics only take us so far. I'd like to go beyond the numbers, or "Beyond Dollars" [.pdf] to use the expression Genworth coins in their landmark report.

I'd like to re-visit and enrich the original premise: is "LTC a Women's Issue"? Respectfully, I would suggest it is much more.

First, our language should evolve from the 1970's: rather than vary between "compartmentalized" and "holistic" psychobabble, we could speak directly by choosing language appealing to "primary earners" vs. "caregivers" (regardless of sex). The former is concerned with keeping his or her financial commitments into retirement, while the latter relies on the income of the former to provide for the day-to-day needs of the family.

In both cases, a sale is impossible if love for others is not present.

Just as importantly, if you've ever provided care then you know that Mom's extended care is not her "issue" alone. It cuts a swath through the family like a tornado cutting through a small town.

It sweeps up Dad. It becomes Daughter's issue and Son's issue. Siblings who don't participate in the caregiving or the funding still participate by stirring up resentment that lingers for years and helps to rip the family apart. Caregivers miss time with their own families-- spouses and children of any gender ("Beyond Dollars" identifies them as secondary and tertiary caregivers).

So you see, our premise fails to live up to the hype. LTC is not a women's issue-- it's an everybody issue. Extended care impacts everyone. Not only has this been true in the past, but it will become more pronounced as longevity between the genders equalizes. Our messaging must reflect this reality or risk alienating significant markets.