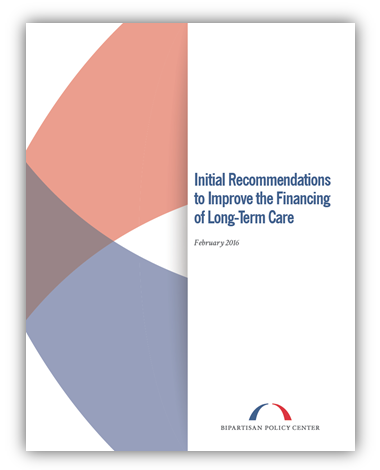 As if the name itself weren't a giveaway, take a look at the logo for the Bipartisan Policy Center: red and blue arching toward one another. And so it is that we half-expect the conclusions of its LTC Initiative (begun December, 2013) to appeal to everyone and please no one at the same time.

When we first previewed their work, we gave the BPC promising marks for their desire to build consensus at a time of political discord and fiscal constraints. Better still was their stretch-goal of producing actionable legislation. And in their initial paper, the BPC headily rejected a "true social insurance option financed through a broad-based tax."

But during the intervening years, we have grown cynical. The BPC has come to the sobering conclusion that there simply is no "single, comprehensive solution" to our nation's LTC funding crisis (that is financially or politically viable anyway). There is no magic bullet.

After two years of work, the Bipartisan Policy Center has released its “Initial Recommendations to Improve the Financing of Long-Term Care”. Building on the lessons of CLASS—that unique populations require unique solutions—the working group has pitched several planks, each with a different target:[i]

Speaking as a producer, I should feel heartened by the BPC’s belief that “middle-income Americans should have a functional, sustainable private LTCI marketplace to help them pay for LTSS should they need it.” Unfortunately, I may never play a role in it.

Wait, what? Why not?

Because they’ve concluded one of the reasons premiums are unaffordable is due to our agent commissions.[iii] So they aim to reduce the price  of insurance by removing us. Consumers of the future will apply for LTCI by one of two means: via automatic enrollment at work (on an opt-out basis), or on the state and federal exchanges. (Ironically, the Bipartisan Policy Center devalued agents during the same month Google Compare announced its withdrawal from agent-less sales of auto insurance—a mandatory commodity and failed precedent rolled into one.)

Part of the BPC’s enormous bet on worksite LTC stems from their belief in the existence of a thriving true group market of eight carriers (even though the actual number is closer to one). But to their credit, they also propose eliminating the early withdrawal penalty imposed on qualified retirement savings tapped to pay LTCI premiums. This is such an agreeable notion that the 100,000-member National Association of Health Underwriters (NAHU) has advocated for it in its own LTC position paper.[iv]

The linchpin of the BPC’s proposal is a new class of LTC product coined “Retirement LTC”. Although described as lower-cost and limited-benefit[v], it should not be mistaken for Short-Term Care (STC), because its benefit periods range between 2-, 3- and 4-years. Instead, keeping the price low are its high deductible (ranging from $10,000 to $50,000, indexed for inflation), its elimination period (ranging from 180 to 365-days)[vi], and built-in 20% coinsurance.

Premiums would be step-rated through age 75 (in other words, policyholders would pay more each year, based on the CPI-U). On top of this, every three years everyone’s rates would be re-priced based on current assumptions. A nonforfeiture benefit would be built-in, as would inflation protection based on the employment cost index (never before used in LTC). Since an annual open enrollment implies some version of guaranteed issue, the BPC assumes Retirement LTC plans might incorporate a vesting period during which no claims would be payable—for example the first 10 years.[vii]

If you recognize some of this product’s features as among the industry’s least popular, you are not alone. The only difference is, the BPC is proposing that every working American buy it.

In future work, the BPC will be exploring:

Finally, they recommend a fully-financed (budget-neutral) catastrophic risk pool for the nationally uninsurable and largest claims (the 15% of Americans 65+ whose care will cost more than $250,000). The BPC does not believe the private market wants to insure claims this large—an arguable point, to say the least. To cover as many of us as possible (estimated to reach 90%), this would be a mandatory, public insurance program, potentially funded via payroll tax.

Deliberately, the BPC did not spend a great deal of energy building out the concept of universal catastrophic LTC since they acknowledged it would be dead-on-arrival in today’s political climate. Rather, they float the trial balloon and leave it to fall some indefinite day in the future.

This is in stark contrast to the LTC Financing Collaborative, whose final report came out within days of the BPC’s and gained national headlines by advocating for their own version of universal catastrophic LTC, calling it not only “most likely to meet the test of fiscal sustainability,” but ominously—since voluntary insurance hasn’t worked—“the only thing that’s left.”

In a recent article promoting its plan, the LTCFC described a possible catastrophic benefit of $100/day for life which would kick in after a 2- or 3-year elimination period, and cost about $300/year in taxes. But the article gently skirted the elephant in the room: such coverage has been marketed before. I still have the ratebooks, and can produce a similar benefit for a similar price. But they've always proven deathly unpopular. Why can't anyone be convinced to spend even a pittance on such a plan?

The answer to this question is the heart of our entire LTC financing debacle[viii], but we can put a pin here for now: the Collaborative's imaginative understanding of Medicaid is holding them back from making real progress.

In almost conspiratorial fashion, LeadingAge also chose February to release their “Pathways Report: Perspectives on the Challenges of Financing LTSS.” And while they see “an urgent need for an LTSS financing system that is insurance-based and guided by principles of rationality, equity and affordability,” they ultimately couldn’t help themselves, and called for “a mandatory, universal insurance option [as] the best choice to minimize costs and optimize coverage.”

If readers are by now curious why three major reports have all called for universal, mandatory LTC, it is no coincidence. The Bipartisan Policy Center, LeadingAge and the LTC Financing Collaborative share many of the same members, cite many of the same sources, and rely on the same modeling (the Dynasim Model co-produced by Milliman and the Urban Institute). Practically all that’s left is for each to sign the other’s yearbook.

The opportunity to catch-up with old friends came on March 1st when the House Energy & Commerce Committee held a hearing which featured these three reports. Although reviews of the testimony were tepid, at least one Congressman present that day (Frank Pallone, D-NJ) was moved to "act with a sense of urgency," and plans to introduce legislation that would finance LTC through Medicare Part E.

Whether any of this will come to pass takes a crystal ball none of us has. Some proposals call to mind the half-baked naïvety of the CLASS Act, while some common-sense ideas are long overdue and will surely be greeted with enthusiasm. It is disappointing that the valuable field experience of agents was not sought, nor were carriers themselves given a seat at the table during these grand deliberations. Nevertheless, we shall remain vigilant to ensure our clients above all are protected, and our livelihoods as well.

[i] The BPC recognizes that financing is the first element which must be addressed nationally. Without adequate payment reforms, the US won’t attract good caregivers and will continue to face a worker shortage.

[ii] Of the private market, the BPC says categorically, “LTSS is an insurable risk.” The signficance of this declaration should not be discounted.

[iii] Never mind that, on average, administrative expense (~16%) contributes more to policy pricing than commission expense (~12%), which adds not much more than the 10-15% cushion added explicitly for safety. Everyone wants to pay "factory-direct" wholesale prices... what the heck do distributors even do? The Affordable Care Act's Medical Loss Ratio (MLR) debate accelerated this assault on the role of distribution (which began with Amazon and eBay), and which we will explore in a future column.

[iv] They would allow access at age 45, and are also investigating the possibility of allowing LTCI as an investment option in workplace retirement plans

[vi] Policyholders would qualify for benefits after satisfying the deductible OR elimination period, whichever comes first.

[vii] They would also seek legal exemptions to ensure Retirement LTC is both tax-qualified and partnership-qualified, and rules changed to protect plan sponsors from fiduciary liability.

[viii] Because nothing is at risk, and someone else always pays.