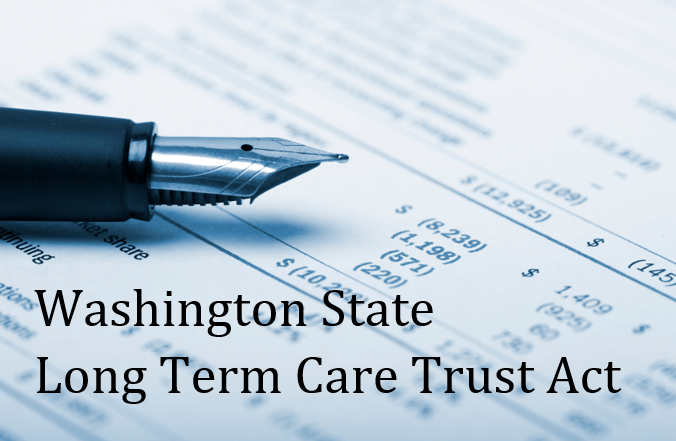 Washington state's Long Term Care Trust Act is a first-of-its-kind publicly-funded program to reimburse eligible long-term services and supports (LTSS).  The program will be funded by a payroll tax collected by employers on behalf of every adult W-2 employee. The rate will begin at 0.58% (fifty-eight hundredths of one percent) on "all wages," and not capped. The rate of 0.58% may be upwardly adjusted beginning January 1st, 2024.

Self-employed individuals, including sole proprietors and independent contractors, can "opt-in" any time after January 1st, 2022 by filing notice with Washington state. Unlike W-2 employees, whose participation is mandatory, individuals who have voluntarily elected coverage may both withdraw from the Trust Act program, or be terminated from it in the future. Important Update: HB 1323, if passed, would modify the preceding rules.

In either case, there is a one-time period during which Washington state will accept applications for lifetime exemption from the program-- and the payroll tax. More on that later.

Although Washingtonians must "vest" in order to qualify for program benefits (that is, contribute taxes for "a total of 10 years without interruption of 5 or more consecutive years; or 3 years within the last 6 years"), employees are expected to continue paying the Trust Act tax until retirement.

Is the Trust Act a good deal?

Like any public program, there are pros and cons which will largely depend on individual circumstances.

The Trust Act will compel every adult in Washington to address the need to plan for long-term care, a task many households currently struggle with. The Trust Act is a vital stopgap for that portion of the population who are unable to qualify for private solutions due to existing health issues. A lifeline could assist those with chronic medical conditions who find the courage, energy and ability to work every day, yet struggle to afford personal care services.

As residents begin to look at the Trust Act more closely, they'll find this quasi-LTC benefit is not portable. In other words, it applies only to those who work-- and remain-- in the state. Although the vesting language is written to allow Washingtonians to leave the state and return during their pay-in years, the Trust Act is not permitted to pay non-residents.

The next thing a worker will see is that the benefit is limited (by design). Trust Act beneficiaries may qualify for 365 "benefit units" in their lifetime. On any given day, either a fraction of a benefit unit may be used, or all 365 may be "stacked" and used all at once, but never more than 365 during one's lifetime. At inception, the Trust Act states the benefit limit means "up to $100" which "must be adjusted annually at a rate no greater than the Washington state consumer price index," though this rate will ultimately be determined by an 8-person council.

Clearly, high wage-earners, those employed by companies or in sectors putting them at risk of getting transferred out of state, and those not covered by the program (e.g. retirees, non-working spouses, self-employed, or those working less than the minimum 500 hr/yr requirement), all have legitimate reasons to be wary of the Trust Act, and to compare alternatives.

But what about everyone else?

Now let's look at Wendy, whose earnings begin at $35,000 per year, but rise annually by a 3.50% cost of living adjustment (COLA). Her 40 year total premium burden is $17,163. Wendy's friend Wanda landed a $75,000 per year job which grew at the same rate as Wendy's over the same 40 years: in Wanda's case, she paid the state of Washington a total of $36,779 in premiums for her Trust Act benefit of $36,500. Granted, the Trust Act benefit units may rise annually (as can the tax rate, by law), but there is no certainty, predictability or planning one can make around this. The unit value may never go up.

Every Washingtonian is allotted the same benefit (a lifetime maximum of $36,500, initially), whether their taxes are $100/yr or $10,000/yr. Most individuals will make a simple calculation: value received vs dollars spent.

Can I be exempt from the tax?

During the period from October 1st, 2021 until December 31st, 2022, Washington state will be accepting applications for exemption from the LTC Trust Act-- and its payroll tax deductions-- from those who attest they have "long term care insurance." For many, such policies will not only save them thousands of dollars (comparing insurance premiums to Trust Act premiums), but they will enjoy access to larger and more flexible long term care benefits.

In Wanda's case above, instead of paying $36,779 over 40 years, she could obtain comparable coverage from the private market for roughly $8,000 over the same time frame. In Walter's case, a private LTC insurance policy would cost about the same as Wanda's since LTC insurance rates on based on age-of-entry, not wages. So, Walter would also pay around $8,000 instead of $11,600-- and he would enjoy a portable policy he could take anywhere from Alaska to Florida.

The LTC Trust Act favors the taxpayer in certain wage and benefit "pricing cells." Generally, these skew towards lower wage earners. Others may find private LTC insurance unattainable, unsuitable or undesirable. More often than not, however, long-term care insurance will provide a better value to the Washington taxpayer. The numbers will tell the story-- let them fall where they may and lead you to your best choice.