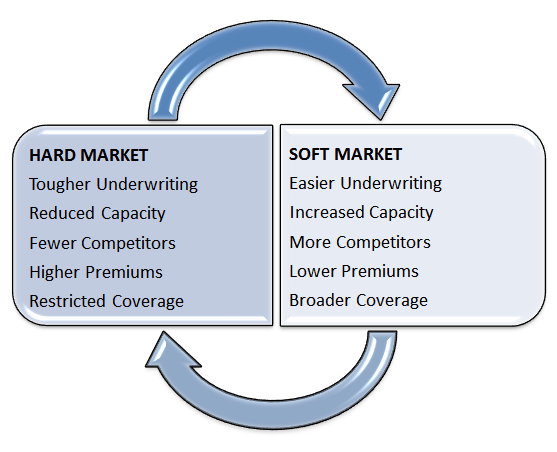 Spring Comes to LTC Insurance: The Blooming of a Soft Market

Although the terms “hard market” and “soft market” are more commonly used to describe the two to ten-year cycles which recur in property and casualty insurance (P&C), they can extend to many lines, including long term care (LTC). (English, 2013) When we pull back and examine the LTC market through a cyclical lens, not only does it improve our ability to forecast, but it sheds light on a multitude of changes which otherwise seem unrelated. Taken together, these changes signal the re-emergence of a soft market, news which the LTC community should greet like the welcome return of Spring.

Many column inches have been written about LTCI’s imminent demise, but on closer inspection what we are witnessing is “economic evolution” typical of any maturing industry. (Forman, 2012) Just as water seeks its own level, the number of carriers has responded to the number of buyers, with some target markets heavily saturated. As the remaining competitors seek to broaden their reach into new markets, the seismic shift between cycles begins.

Reviewing the characteristics of each cycle, it is apparent they operate as “gas pedal” and “brake”. Do we want to slow sales or speed them up? The result is that a hard market is a seller’s market, while a soft market is for buyers. As the pool of suitable customers shrinks and LTCI sales reach historic lows, we expect a concerted reaction to reach and win new clients.

Although conventional wisdom states that policies are tougher than ever to qualify for—that underwriting standards flow down a one-way street—we lose much through this oversimplification. At least three top-tier carriers have announced relaxed underwriting standards this year. Whether by accepting previously-uninsurable conditions (like Type-2 diabetes with insulin, or cirrhosis of the liver) or waiving invasive requirements (like those involving bodily fluids), the pendulum is swinging back.

We are also seeing more aggressive use of “counteroffers” throughout the industry, be it through an alternative benefit, rider or product than originally applied-for. Only through the accumulation of seventy times the claims data since just 2000 are these moves possible, allowing a fair but careful balance between benefit to the policyholder and exposure to the company. (Glickman and Falter 2016)

Some carriers have found another way of accepting more applicants: through the use of combination products which link life insurance with LTC. By incorporating mortality underwriting (which benefits from longer-lived policyholders) with morbidity underwriting (which benefits from shorter-lived applicants), these products have declination rates about 1/3rd that of traditional LTC insurance. (Hendricks, Holland and Vey 2016) Furthermore, through the use of large single premiums, some shift an inordinate amount of risk back to the policyholder in the form of a large “deductible”, i.e. the exhaustion of one’s own money first.

Although it’s a funny concept to think about, insurance companies do have a finite “supply” of insurance they can sell, similar to inventory at your local retail store. (Hair 2001) They can “sell out” of insurance if they assume more risk than they can financially support (and state regulators keep a close watch on this). In the most extreme examples, a company will suspend sales in a state entirely. But at the other extreme, an oversupplied company has a lot of capacity, and we have been told by at least two major carriers—who shall remain unnamed, of course—“We’ll take as much new business as you can send in!

This might seem bizarre in another industry—who wouldn’t want to sell as many widgets as possible?—but LTCI puts a premium on slow, controlled growth. With its high capital requirements, growing too fast can easily strain an LTCI carrier. It’s not always the case that companies want business (especially if they are waiting for a new, more profitable product to come to market and replace the one currently for sale). So when we read that one of the market leaders is making a nationwide push to hire agents, a second is reportedly twenty percent overstaffed, and a third has lifted its unofficial cap on new business, these are all signs which point to increased capacity.

While the last decade was marked by carriers exiting the long term care insurance market (from a peak of around 110 to today’s dozen or so), the transition to a soft market predicts new entrants will return. And that’s exactly what we’re seeing (aided by a new study from the Society of Actuaries which demonstrates to sideline insurers the remarkably good odds of a profitable future selling LTCI). (Loomis, Glickman and Forman 2015) Within the last twelve months, heavyweight endorser AARP has signaled a new partnership with the private market, a brand new carrier has announced its intention to sell traditional LTCI, and a third major brand has shed every product in its portfolio but LTCI.

Meanwhile, the number of life insurers who recognize the demographic opportunity represented by the Silver Tsunami is unprecedented: seven have entered the combo space within the past five years, while over twenty offer an accelerated benefit for chronic illness and/or critical illness. LIMRA reports that acceleration riders are now a “must have” benefit (Ho 2014), and one carrier was quoted in confidence saying, “You will never see another life insurance product sold by us which does not include a long term care benefit.

These forays do not even consider the ancillary products which are now competing for the same dollar. Just as Netflix and Amazon now compete for the same eyeballs as cable and broadcast television, we must entertain non-LTCI competitors such as critical illness, reverse mortgage, short-term recovery, and life settlements (to name a few). Buyers are finding this softening market exceptionally dense with options.

And then there are the disruptors—those Silicon Valley-based, venture capital-backed companies who are re-writing not only how insurance is bought, but re-inventing insurance itself from a clean sheet of paper with an outsider’s perspective. One or both developments will bleed into the world of LTCI, as we are already aware of such initiatives.

While most observers would argue premiums are on an ever-upward spiral, this misses some of the nuance between the lines. In a softening market, sellers compete for buyers. We’ve seen how insurers might widen their underwriting, but they can also make their premiums more attractive or broaden their features and benefits. There are now three carriers who have agreed to share some of their profits with their policyholders (two in the form of dividends, and one in the form of policy credits). Another two carriers have explicitly re-packaged their products in order to drive the price of entry below the magic $100/month flashpoint at which buyer interest flares. (Mangan 2015) A few carriers are even modifying agent compensation in an attempt to hold down prices

And for what it’s worth, there are other entities designing products these days: think tanks like the Bipartisan Policy Center (BPC) and LTC Financing Collaborative have proposed hypothetical LTC plans. Neither is as concerned with the quality of coverage as with the quantity: they’ve concluded the best way to ensure universal participation is by making policy ownership mandatory. (Bipartisan Policy Center 2016) But rates are definitively “soft market”: premiums are kept low through taxpayer subsidy, co-insurance, long elimination period, high deductible, low-to-no agent commissions, and periodic rate recertification.

The good news is that the LTCI Pricing Study predicts the age of unstable rates is behind us. Through regulatory fiat or actuarial conservatism, premiums will toe the line.

Last year’s mantra was “de-risking”: removing or tightening those policy benefits which exposed the insurers to outsize risk. Areas of concern included informal caregiving, lifetime benefit periods, and unencumbered cash, to name just a few. Are we now so optimistic that we forecast these benefits returning this soon? As a matter of fact, unlimited benefits are coming back. And at least two combination products offer cash. But not all desirable benefits must carry risk.

In the hard market of the last decade, products were unbundled to their “a la carte” pieces. In the soft market that’s coming, we can expect more and more “built-ins” to create a competitive edge. Technology will fill this gap—bridging the need for immediate benefits without costing carriers a fortune. Disruptive benefits based off of Airbnb and Uber, and robots too, are not far off. (Leiber 2016) Remote sensing of seniors has been hailed a “mega-trend”. (Boodman 2015) As the sharing economy extends its reach into senior services, the only thing lacking is a structural, systemic way to pay for them.

The last eighteen months have witnessed unprecedented innovation in coverage design from both inside the industry and out. From the eighty-five (85!) separate concepts brainstormed by the Long Term Care Think Tank, to the “RetirementLTC” design of the BPC, to the ongoing Home & Community Based Care pilot programs of Medicaid (competitively nicknamed “The Medicaid Insurance Company”), to the two-way mirror focus-grouping from the carriers themselves, never before has such variety been under the microscope.

Tim Urban describes it best, “When Apple decided to make a phone, they didn’t try to make a better Blackberry—they asked, ‘What should a mobile phone be?’” (Urban 2015) This attitude now permeates LTCI design, as head-scratchers wonder if the essential product which has served the last forty years may have reached the end of its lifespan. Having settled the question of whether LTC is an insurable risk once and for all (Bipartisan Policy Center 2016), the question then becomes, “What should a long term care policy be?”

The only constant in life is change—but it’s not haphazard. Those who study any profession will recognize the hidden cycles deep below which produce the visible waves on the surface. A few years ago, we claimed to have entered the “Golden Age of Long Term Care,” since there has never been a better time to buy—or sell—long term care insurance.

Today we double-down on that prediction. Unless obstructed, the private market is entering a period of softening, which portends good fortune. Viewed as a whole, LTC is becoming a “buyer’s market”, led by increased avenues through which individuals can access coverage.

This was inevitable. The market most suitable for private LTCI is the uppermost quintile in terms of income and net worth, even as LTCI ownership over age 65 is nearly twenty percent. Those who argue that the industry suffers from an incredibly low penetration rate have it exactly backward: the primary market is almost completely saturated.

The cherry picking of the first market is over, as companies move downstream and turn their attention to the broader eighty percent. Anyone looking over the horizon needs to build such products: unless the infamous retirement woes gripping the Millennials are repaired—forty-one percent of whom have less than $100 in their checking accounts (AICPA 2016)—LTCI will be dead in a single generation anyway.

Motivated then as much by competition as by self-preservation, companies are breaching new LTC markets, then racing to fill them with appealing new ideas. Tens of millions of Americans will find themselves the center of this attention, wooed by an increased number of competitors wielding a classic toolbox of underwriting, pricing and benefits to win their business.

It would be wise to take advantage of this cycle before our good fortune ebbs.